See exciting stories of engineers and engineering in the news!

In Memory of Richard Berkenfeld, PE

In memory of Richard Berkenfeld, PE

Let us remember our dear friend and colleague

Richard G. Berkenfield, P.E. He had been practicing Consulting Engineer since 1965 and had been involved in the design of various buildings ranging from industrial, commercial, commerce, government facilities and residential buildings. In addition to performing building inspection services he had been engaged by lawyers as an expert witness in safety standard and building code requirements. Mr. Berkenfield was a prominent member of the American Society of Civil Engineers, the National Society of Professional Engineers, the National Academy of Building Inspection Engineers, and the American Society of Safety Engineers.

He will be dearly missed and our thoughts and prayers go out to his family.

On Sept. 29th at 11:00 am, a ceremony was held for the renaming of the pedestrian bridge over the Hawtree Basin at 163 Avenue for Joel A. Miele, Sr. PE in recognition of his many years of service to the City of New York. The ceremony was held at the intersection of 99th Street and 163rd Avenue. The City Council had unanimously approved the renaming of a pedestrian bridge to the "Joel A. Miele, Sr. Pedestrian Bridge," in honor of the former Community Board 10 chairman and commissioner of two city agencies.

Joel A. Miele, Sr. PE had died four years ago. The law clearing the way for the renaming was introduced by Councilman Eric Ulrich (R-Ozone Park). "He was the embodiment of public service who dedicated his entire adult professional life to serving our city and community," Ulrich said in a social media post shortly before the Council's vote. "A special thank you to Community Board 10 Chair Betty Braton who spearheaded this effort."

Remember an Engineering Legend by Helping to Educate Another One 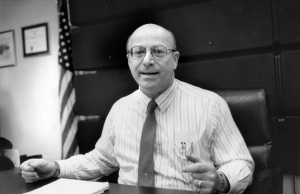 Joel A. Miele Sr. PE, F. NSPE, former NYSSPE State President, NYSSPE Queens Chapter President and Commissioner of the NYC Department of Environmental Protection, passed away in May of 2013 at the age of 78.  In addition to a partner in his own firm, Miele also served the public and his fellow engineers through the following positions throughout his career:

Find an Engineer - Engineering Services From Our Members

Back to Top of Home Page